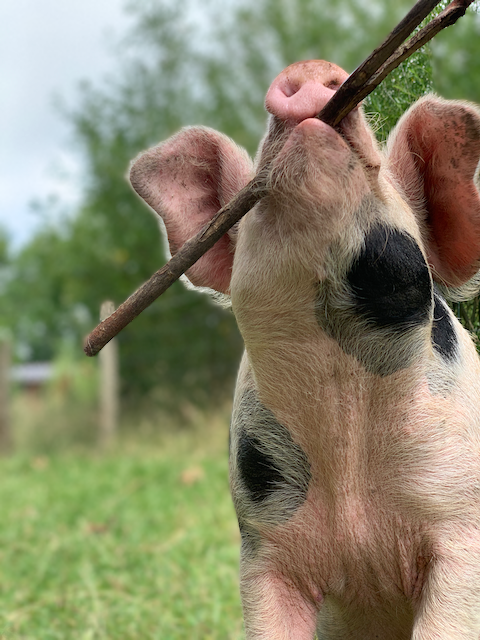 The hay is in, we’ve recovered and we’re looking forward to a few weeks of less haste and even less speed. Jolantha and Edith are already in summer mood, whilst Spotty and Glossy are thinking about it.

I’ve been ambivalent about Jamie Oliver before now, but his lament does often seem to be the case in food and farming. His own business has troubles, maybe because he wanted to employ people, maybe because advertisers saw him as ‘campaigning’ and he saw them as profiteering.

In a world where 30 day chicken has been revealed as the norm for KFC, children here in the UK suffering a life time of food poverty and the rise of Type II diabetes, we have to wonder what we’re doing.

For me, August will be about harvesting our hard work, thinking about our meat sales for the Autumn, doing some experiments such as giving the pigs a patch next to my veg garden…and wondering what’s next in September and the Autumn.

Back to caring, our farming practice is based on caring and purpose and it’s true, it doesn’t pay as such. But abundance, things only I can see because I’m lucky enough to witness it, that’s treasure beyond anything that meets the word payment.

But don’t let that put you off ordering from our shop, we do have bills!