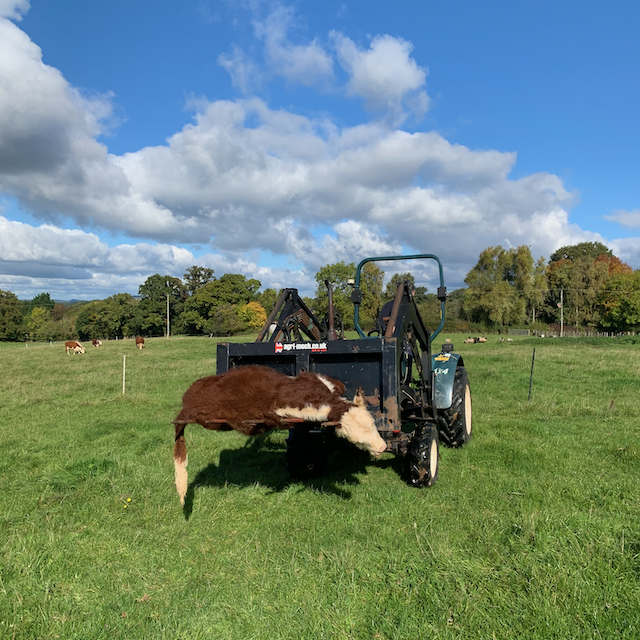 Our herd of Traditional Hereford cattle are complete with horns and beautiful chestnut coats with white underbellies and faces. It’s a suckler herd which means the calves and their mothers stay together for at least 9 months. By the time they’re reached that age, the cows are ready to let their teenagers go off into other pastures to give them a break.

We kept a very close eye on her until one morning, there she was, lying down on her side, looking somewhat shocked, as a tiny, curly haired chestnut calf emerged, hooves and nose out first, slipping and sliding out onto the grass. Carol remained lying down, utterly bewildered by the incident. Her mother Rita, who is the herd head honcho, came over and licked the new born until Carol eventually got to her feet and began to clean her new baby. Each year we have a different letter of the alphabet for our calves making it easier for us to identify them instead of only relying on a number. It also lends dignity to them and personality. This calf was called Eve.

And racing forward to now, poor Eve is dead. We noticed she didn’t seem right a day or so ago, standing alone, breathing heavily and I thought I noticed a slight shiver in her leg. I managed to catch her with a halter, the very catch itself confirmed she was sick. I stroked her head, her small horns just peeping through her white curls but her heart racing and her breath rattling. She rested her head on my arm for a while and Carol wandered over to check what was going on. Oddly, Carol soon wandered off, as if she knew something. The vet arrived and very quickly poor Eve died.

I was shocked. One minute this tough calf was standing with me, days before skipping with her pals, and now on her side, eyes rolling and tongue lolling. I was both tearful and angry. Why could this have happened? What had I done wrong to let her die?

The same day, the vet did a post-mortem on Eve and we discovered what we think was the cause – toxicity caused by eating acorns. I watched the vet carefully cut into Eve’s rumen, and her three stomachs. Each one was beautiful, differently equipped to do a different job in the process of breaking down grass. The rumen had smooth insides but the reticulum a web of perfectly formed mesh. Her pink intestine was incredible in its curliness and perfect fit into her abdomen.

Somehow this miracle of the cow’s insides lifted our spirits. This magnificent creature is not just a cute thing on a mug, or pretty in our fields, but it can do something amazing. It digests grass to give us beef and milk. We can make no use of grass or leaves or twigs but the Hereford cow thrives upon it. Eve didn’t die for nothing, she has shared with me her inner world, quite literally.